ABC responds to an Associated Press article on supplements for pets, which featured quotes from Mark Blumenthal.

September 23-26, 2009: ABC's Mark Blumenthal will be at the World Tea East Conference and Pavilion in Boston, MA to speak about recent clinical research on tea.

In these hot summer months, what could be more refreshing than a cool glass of iced tea? One of the world’s most popular beverages, tea is associated with many health benefits. ABC Founder and 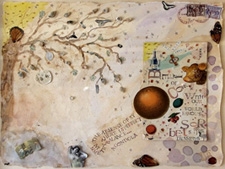 Executive Director Mark Blumenthal will be presenting information on tea research at the upcoming World Tea East Conference in Boston, MA. Tea is also increasingly being used for purposes other than health and refreshment. An article in this issue of HerbalEGram explores projects that have incorporated tea as inspiration and artistic medium.

Another beverage rapidly gaining in market value is energy shots. A recent report, covered in an article below, suggests that energy shots serve an even larger niche of people than energy drinks. Also in this issue, we cover the FDA’s recently released final guidance on reporting and recordkeeping of dietary supplement serious adverse events.

Resveratrol: The Hard Sell on Anti-Aging. Business Week. 7-29-09. False expert and celebrity endorsements of resveratrol products sold by FWM Laboratories are causing concerns about online advertising and software used by Google and other search engines.

Senators Seek Coverage for Alternative Therapies. The Boston Globe. 7-24-09. A group of senators are advocating an amendment that would prevent insurance companies from discriminating against healthcare providers with a state license—a move that would likely require coverage of many alternative medicine treatments.

Oakland Voters Approve Tax on Medical Marijuana. Los Angeles Times. 7-22-09. In an attempt to lessen the city’s budget crisis, 80% of Oakland, CA citizens approved a ballot measure to increase a tax on medicinal marijuana dispensaries, becoming the first in the nation to implement such a tax.

Reactions to News on Dietary Supplements. Alternative Health Journal. 7-19-09. A recent analysis of market sales and media coverage shows that Americans are more likely to respond to a news story suggesting that a supplement could cause harm than to a story suggesting that a supplement is safe, works, is ineffective, or has questionable ingredient purity.

It's Poppycock to Grow Poppies Here but Destroy Them in Afghanistan. The Daily Telegraph. 7-13-09. As foreign militaries struggle to eradicate poppy in Afghanistan, this author argues that the United Kingdom should collaborate with Afghans to produce a medicinal market for opiates, which are made from poppy.

Federal 'Organic' Label Questioned. The Washington Post. 7-3-09. The integrity of federal organic legislation and the National Organic Program has recently come under scrutiny as the USDA’s relaxed standards allow for the inclusion of an increasing number of non-organic substances.

Court Orders Spammers To Give Up $3.7 Million. Darkreading.com. 7-2-09. After selling millions of dollars worth of products touted as hoodia weight-loss pills, 5 companies must pay $3.7 million for illegally using spammers to drive traffic to their websites, which contained deceptive advertising.

A study finds that the majority of physicians and nurses use and recommend dietary supplements. Press release from the Council for Responsible Nutrition (CRN).

November 11-13, 2009: SupplySide West. Las Vegas, NV. ABC members who manufacture finished products can enter ABC09 when registering to receive a $50 discount. *Offer valid through Nov. 1, 2009, and does not apply to a previously paid registration.

August's selected book excerpt comes from Chinese Herbal Medicine: Formulas and Strategies, 2nd edition, complied and translated by Volker Scheid, Dan Bensky, Andrew Ellis, and Randall Barolet, and published in 2009. This excerpt contains the book's detailed 14-page table of contents, as well as part of Chapter 12: "Formulas that Regulate the Qi." All are available here.

The current HerbClip bin was released on July 30, 2009. The following samples have been made available online to all members:

High Serum Lycopene May Protect Against Some Cancers

ABC members at the Academic level and higher can access all 15 HerbClips just released by visiting the HerbClip homepage (be sure to log in). If you are an Individual Member, gain access to all HerbClips and the HerbMedPro database by upgrading your membership.