Here's another adjective you can add to the list of conditions that Rhodiola might be able to treat: anti-depressant. Researchers may have found a new treatment for mild to moderate depression in a Swedish Rhodiola extract. You can read about this trial in HerbClip 110677.342: Special Swedish Rhodiola Extract Shows Benefit in Mild to Moderate Depression in Clinical Trial. You can find this story as well as research, community, regulatory and industry news in this month's HerbalEGram and at the American Botanical Council's Web site http://www.herbalgram.org/.

Now in our 20th year, ABC is looking toward an very exciting and productive 2008 as we strive to bring more science-based Herbal Information to the mainstream stream media, to health practitioners, and into the homes of consumers. Your generous end-of-year tax-deductible donation will help make 2008 a great start to another 20 years of science-based Herbal Education!

We wish you a Pleasant Holiday Season and a Healthy New Year!

Sincerely,
The Staff of the American Botanical Council 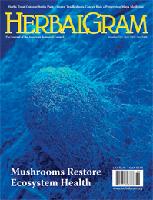 Mycelium Running: How Mushrooms Can Help Save the World - A Book Review

Additional articles from previous issues are available at the online HerbalGram Issue List.

We tested the links of the articles below just prior to publication to ensure that they were still live. However, various publications disable links at different times and we are not responsible for the longevity of links for these articles.

New Body to Test Chinese Medicines
Within the next year, a Chinese medicine research facility in Australia will be up and running due to a partnership between the University of Sydney and the Sun Yat-sen University in Guangzhou, China.
Alexander, Harriet. New body to test Chinese Medicines. The Sydney Morning Herald. November 21, 2007.

Canada Bars Seaweed-Apparel Health Claims
Canada’s Competition Bureau has ordered a T-shirt company to remove all claims on its products and website which claim that the seaweed in the shirts improves skin conditions, blood supply to the skin and reduces stress. If the company does not comply, the Canadian bureau could sue the company.
Story, Louise. Canada Bars Seaweed-Apparel Health Claims. The New York Times. November 17, 2007.

The current HerbClip bin was released on December 14, 2007. Two samples have been made available online to all members:

Review of Clinical Trials Regarding Effectiveness of Individualized Herbal Therapies

ABC members at the Academic level and higher can access all 14 HerbClips just released by visiting the HerbClip Homepage.

ABC's Individual members can upgrade membership to the Academic level to access all HerbClips.

The HerbClip Educational Mailing Service is published twice monthly and provides printed copies of reviews/summaries along with the original articles (in most cases). This unique educational benefit is available at the Sponsor Member level and for HerbClip Service members. For more information, please contact ABC’s Membership Department by email or by phone at 512-926-4900.

FDA Requesting Comments for Changes in Food and Supplement Labels